Throughout the U.S. military history, many Asian immigrants to the United States enlisted and served alongside their counterparts all the way back to the Civil War. More importantly, many women started to formally enlist in the early 20th century to become part of the growing strength of the U.S. Armed Forces and some of that small number include Filipino American women.

FYP-DC remembers all the women who have served in the military and honors those who are still currently serving our nation.

Babette “Bette” Bolivar was born in Hawaii and raised in various locations in the Western Pacific by Filipino parents Ted Cereno Bolivar, from Camarines Sur and Virginia Dolor of Pangasinan. Her father Ted retired as a U.S. Navy Chief Petty Officer. She graduated from the U.S. Naval Academy in 1985 with a Bachelor of Science degree in oceanography. She also holds a Master of Science in management from Troy University. She was also inducted into the Women Divers Hall of Fame.

Commissioned in June 1979, Vice Admiral Raquel Bono obtained her baccalaureate degree from the University of Texas at Austin and attended medical school at Texas Tech University.

Shortly after training, she saw duty in Operations Desert Shield and Desert Storm as head, Casualty Receiving, Fleet Hospital 5 in Saudi Arabia from August 1990 to March 1991. Her other duties include being a surgeon and head of commands in various Navy locations.

In September 1999, she was assigned as the director of Restorative Care at the National Naval Medical Center in Bethesda, Maryland. She currently serves as director of Defense Health Agency (DHA) in Falls Church, VA. The Director of DHA oversees a joint, integrated Combat Support Agency that enables the Army, Navy and Air Force medical services to provide a medically ready force and ready medical force to Combatant Commands in both peacetime and wartime. The DHA supports the delivery of integrated, affordable, and high quality health services to Military Health System (MHS) beneficiaries and is responsible for driving greater integration of clinical and business processes across the MHS.

Bono is a diplomat of the American Board of Surgery and has an Executive MBA from the Carson College of Business at Washington State University.

Florence Finch in an undated photograph. She enlisted with the Coast Guard after working for the Philippine resistance and aiding the Americans in World War II. Credit United States Coast Guard

Florence Ebersole Smith Finch was born Loring May Ebersole on Oct. 11, 1915, in Santiago, Isabela, Philippines. (It is unclear how her first name became Florence.) Her father, Charles, had fought in the Philippines for the U.S. Army during the Spanish-American War and remained there after it was over. Her mother was the former Maria Hermosa.

She married Navy crewman Charles E. Smith who died helping American and Filipino troops during the Japanese invasion. Florence was working as a secretary for U.S. Army intelligence in Manila when the Japanese invaded the Philippines soon after the attack on Pearl Harbor on Dec. 7, 1941.

Florence avoided internment by claiming her Philippine citizenship and hiding her American background. She received word from her imprisoned Army intelligence boss regarding shortages of food and medicine in the POW camps. Finch managed to direct supplies to American prisoners of war and Filipino resistance groups.

In October 1944, she was caught and the Japanese arrested her. They tortured her with electricity and forced her to spend weeks in a 2-foot-by-4-foot confined space. Through it all, she never revealed information regarding her underground operations or fellow resisters. When American forces liberated her prison camp in February 1945, Finch weighed only 80 pounds.

Florence then enlisted in the U.S. Coast Guard, eager to continue the fight against an enemy that had killed her husband. Later, Florence met her Robert Finch and they married and moved to Ithaca, New York, where they spent the rest of their life. She received the U.S. Medal of Freedom, the highest civilian medal awarded to Americans who aided in the war effort and was honored for her service when Coast Guard Base Honolulu named a facility for her. Of the thousands of women serving in World War II, she was the first to be honored with the Asiatic-Pacific Campaign Ribbon. 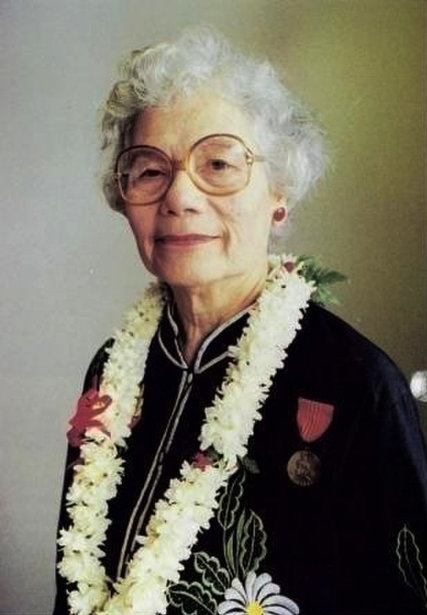 Florence Finch was an atypical hometown hero. For nearly 50 years after World War II, virtually no one outside of her family knew that she was a highly decorated Coast Guard veteran and a former prisoner of war whose exploits had been buried in time.

And even on those rare occasions when she recalled her heroics in the Philippines — supplying fuel to the Filipino underground, sabotaging supplies destined for the Japanese occupiers, smuggling food to starving American prisoners and surviving torture after she was captured — Mrs. Finch did so with the utmost modesty.

She was a physician and former flag officer in the U.S. Navy. She is the first Filipino American and graduate of the Uniformed Services University of Medicine to reach the rank of Rear Admiral in the U.S. Navy as well as the first woman to become the director of the White House Medical Unit.

She served as a physician to President George H.W. Bush, and was personally selected by the incoming President, Bill Clinton, to be White House Physician and director of the White House Medical Unit. In 2001, Dr. Mariano retired from the Navy and left the White House to join the Mayo Clinic in Scottsdale, Arizona. In 2005, she went on to found the Center for Executive Medicine in Scottsdale.

Dr. Connie Mariano is used to breaking barriers, used to shattering the glass ceiling. She has achieved an impressive list of “firsts” that include:

These amazing achievements are just the tip of the iceberg of accomplishments for this remarkable woman, told with grace, humor and passion in her new book, The White House Doctor: My Patients were Presidents.

“Dr. Connie Mariano held many titles during her nine years at the White House. In each case, Connie was the first to hold the title: the first military woman to become a White House Physician, the first woman Director of the White House Medical Unit, and the first Filipino American in American history to become a Navy Rear Admiral…Throughout my entire presidency, Connie was at my side making sure I stayed healthy. She was with me during the happy and the sad times, as well as in the historic and private moments. I trusted her with my life and the lives of my family.”

Eleanor V. Valentin was born in Seattle, WA and started her career in the Navy in 1982. She attended the University of Washington and was a cheerleader while completing degrees in zoology and psychology. She later earned two master’s degrees in public health at the University of Hawaii.

For the cheerleader-turned-admiral, destroying stereotypes seems to be an M.O. While women only won the right to serve on ships 31 years ago and still aren’t allowed to serve in ground combat roles, on submarines, or in most special operations forces such as the Navy SEALs, Valentin is putting women in the Navy full speed ahead.

Rida Cabanilla was born in Ilocos Sur, Philippines and has been a resident of Hawaii since 1970. She earned her Bachelor of Science in Nursing from the University of Hawaii and attended the United States Army Command and General Staff College. She was a politician and a Democratic member of the Hawaii House of Representatives. She was a Lieutenant Colonel in the US Army Reserves Surgeon Section 9th Corps Readiness Command.

Anastasia Moreno, nicknamed Ana, was a US Marine of Japanese and Filipino American descent. She served for the United States Forces Japan as part of the United States Marine Corps in Japan from 1999 to 2004. After finishing active duty, she went on to become a civilian translator for the federal government, as well as a manga translator for Seven Seas Entertainment, translating licensed titles such as Strawberry Panic!, Girls und Panzer, and Girl Friends.

She started writing Marine Corps Yumi in part because of the lack of female Marine representation in the media. She drew from her own experiences as a Marine, as well as her understanding of Japanese people and culture thanks to her Japanese ancestry from her mother’s side. She collaborated with Takeshi Nogami, who is known for his work on Strike Witches and the aforementioned Girls und Panzer, among other titles.

After a long battle with cancer, Moreno passed away on July 12, 2015. The series was continued by Nogami as he was given the whole plot by Moreno before her death and the English translation will be continued by Dan Kanemitsu.